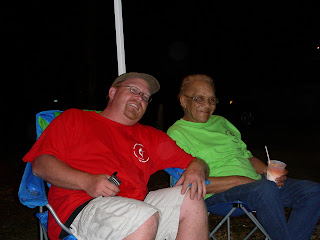 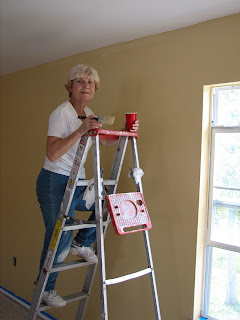 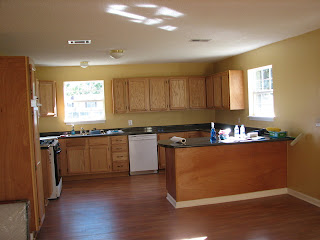 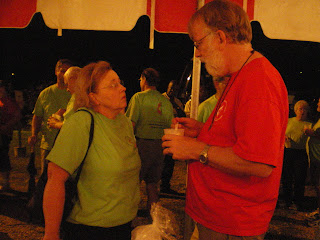 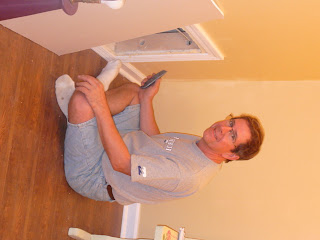 On the last work day, we took a lot of pictures. I will try to make
up for not sending any yesterday.

Troll and Kristen helped work this morning. What a joy! Bob worked
on the front porch until he had to go to the airport to catch his
plane. He and Elbert and occasionally Rod put some finishing touches
on the porch, then Rod painted some of the trim and touched up other
blue spots.

Howard and Lewis tried to get a back porch built. they got it
partially done. Next team needs to put on the roof of it and the
railings.

Corrine and Barbara and Ginger and Rod St. and Erin tried very hard to
get all the painting done in the house. Didn't make it. We gave a
list to Pastor Eddie (from St. James where we are working through) of
what we didn't get.

We took some of the new people and a couple returners around to see
some of the destruction in the daylight. It is an odd balance to
find: Understanding the situation we are in, seeing it so we can
empathise and talk about intelligently vs. getting the work done.
Maybe we would have gotten all the painting done if those that went
around would have worked on painting instead. I think it's important
to get a feel for the area, though.

Harold did devotions by phone tonight. Several people had tears
because of his prayer and message for us.

Pastor Eddie took us into the sanctuary and thanked us and prayed for
us and gave us t-shirts. There was another group there with us from
Colorado. (HUGE group!)

I am pretty tired. I am glad to have helped and to have made a good
experience for the participants, but I will be glad to turn the van
north again. I promised to go to New Orleans in April, but honestly,
I don't know if I'll do it. Something to pray about, I guess. And
now, I just got an email from a friend in Colorado who says her
fiance, who is from Africa, wants to come with us next time. I am
feeling better than yesterday. Thanks, Leslie for the Vernors and
chicken soup reminders. I think the remedy is just sleep. So let's
attach these pics and call it a day.