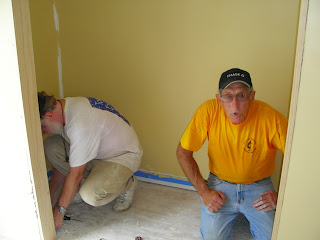 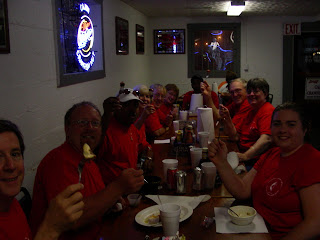 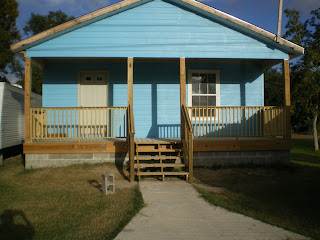 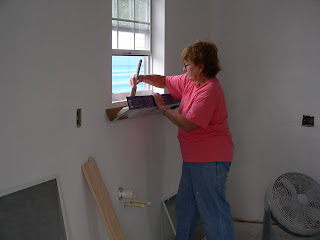 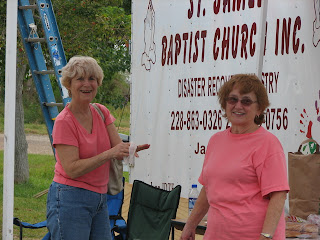 We started the work day early today to try to get a few more things
done and to leave a little earlier.

We are starting early tomorrow, too.

We got a lot done. Emma's house passed electrical inspection. Howard
and Darold and Lewis continue to try to get a lot of "Little things"
done so Emma can move in. I guess it's like de-bugging a system.
They are de-bugging her house. Emma wants to have us over for lunch
tomorrow. Howard thinks the last thing that has to happen is for the
gas company to "set the meter." I don't know what it means, but it
sounds like a good thing.

At Thomas's house, Elbert and I got the facia done – just have to
make the corners look good. I think it looks pretty good, but Elbert
isn't pleased with it yet. I really enjoy working with him because we
laugh a lot and because we seem to compliment each other well.

Rod St. and others were working on doors.

Ginger and others got locked into a back bedroom while they were
taping. I don't understand it, but it's funny….

Passed out a lot of flyers for the rootbeer float party. (Judy R.
will be surprised to know we are still using the same flyer she wrote
two trips ago with just minor tweaks.)

We had dinner tonight at a local restaraunt. We tried alligator
sausage. I had an alligator po'boy. (tastes like chicken…)

We are looking forward to the rootbeer float party tomorrow night.
There is another team working down here from Minnesota. They are
coming over to hang out with us. There are a lot of people in the
neighborhood we are working in. Linda called a church a few blocks
between Emma's and Thomas's house and they said we could use their
parking lot. I'm a little nervous about this. Could be LOTS of
people.

Pictures are:
Bob looks like he is surprised
The team eating alligator sausage
Thomas's house from the street
Corrine
Corrine and Barbara- Wonder twin powers, Activate!

Prayer requests
Howard's daughter works with a school system that had one of their
students attempt suicide. He is in very serious condition
Team unity
The rootbeer float party
That Emma can move into her house this week