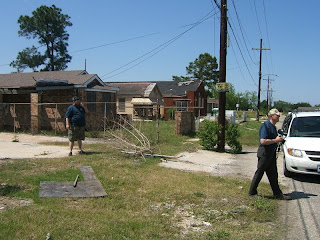 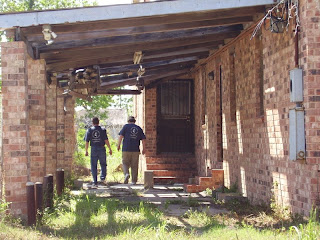 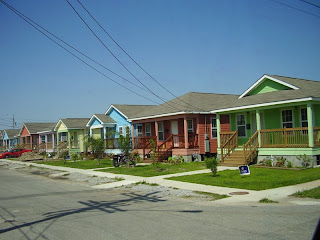 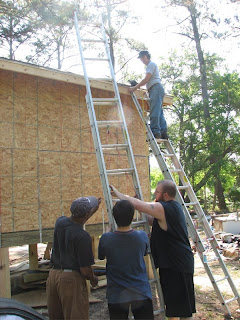 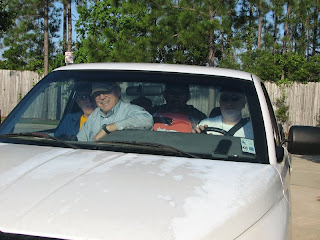 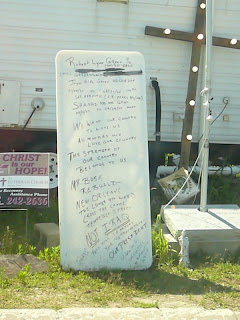 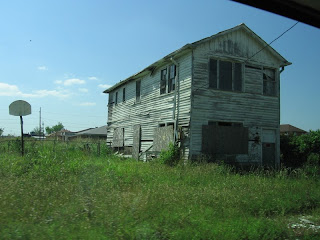 It has been a long day.

The highlights:
Troll got in around 8:00am.  Very good to add him to the team.
Worked a half day, then went to New Orleans for a half day and into the evening.  On this trip, we saw the devastation of the Lower 9th Ward.  Unbelievable.  At our orientation on the first day, the leader told us that in Slidell, they are back to 85%, but that in New Orleans, they were at 5%.  There are several factors that play into the severity of the devastation.  One of which is just the amount of people living in New Orleans verses places like Biloxi and Gulfport.  Keep in mind, also, that in Mississippi, when the water came in, it left right away.  In New Orleans, it sat for weeks and had to be pumped out..  There are some areas that have their houses rebuilt, and are shooting for normalcy (however this situation defines the new normal.)  Even if rebuilt, however, there is so much changed.  There are so many people that didn't come back, and that affects the economy of the area, which impacts the jobs available, which impacts WHO can live there, etc.
In the half day of working, Gary got the tub installed and is trying to finish that bathroom completely before we go.  Darold led Howard's team today (added Rod Sc., Matt, and Troll) and got a lot of the shingles on.  Bob did a lot of misc. stuff in the house he has been working on.  It sounds like they keep adding stuff to him.  Howard was asked to go fix some last minute things for a home they are going to rededicate to the homeowner, so he did those thing on his own.  Erin's group is waiting on the supervisor from UMCOR to supply some tools they need for fixing a bunch of doors.  Sounds like they are getting a lot done there, too.
There are so many pictures on our photo album pages.  You can click on this link to get to them.  I think tonight, I'm just going to give you the link instead of uploading these pictures.  http://picasaweb.google.com/RodScofield/NOLA1 That will get you to our pictures.  I think there are about 79 pictures in there.  For some reason, I couldn't reorganize them so they are chronological.
Thank you to everyone that has sent emails and cards supporting us.  No cards have arrived yet, but I'm hopeful for tomorrow.  It means a lot to the crew to hear from y'all.
Goodnight –  I have to sleep fast.
https://bethetool.org/wp-content/uploads/2019/05/be-the-tool-logo.png 0 0 Rod Scofield https://bethetool.org/wp-content/uploads/2019/05/be-the-tool-logo.png Rod Scofield2008-05-01 05:31:002008-05-01 05:31:00Day 5- New Orleans
0 replies