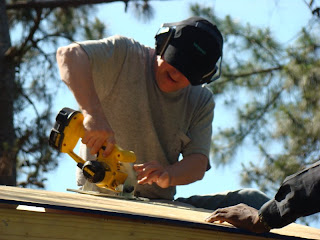 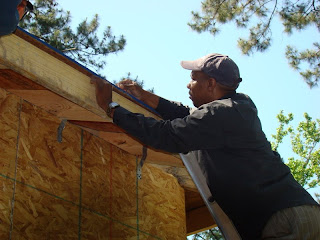 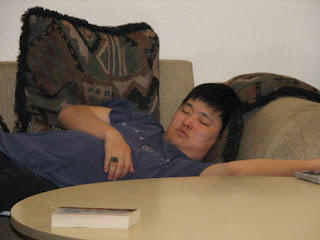 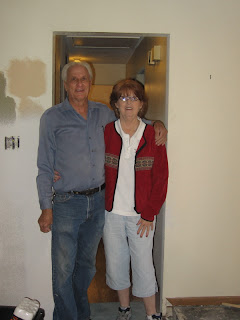 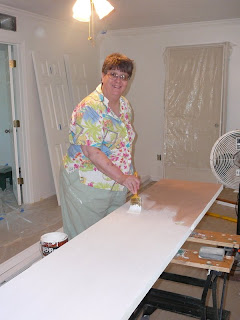 Howard's team (Darold, Dave, and Lewis) got a lot done on the shed they are working on.  It's not completely square, so they have been struggling.  –  They have the decking and the paper on the roof of it.  Still to put on shingles and vinyl siding

Gary's team (Rod Sc., Darlene, Deb, Ali, and Matt)- got a lot of painting done.  Gary worked on installing a new tub.  He was frustrated with it.  I never heard him use curse words.  Matt stayed home sick today.  Something gastro.  The picture of him sleeping was in the TV room the night before.  He fell asleep watching an NBA game.  The picture of the couple shows the homeowners for Gary's house.
Bob's team (Vern and Rod St.,) ended up getting a lot of projects added on to the house they were working on.  They worked on it all day, and are going to finish it (again?) tomorrow.  Apparently, they have earned a lot of trust by our work supervisors from UMCOR, because they gave Rod St. the key to their storage trailer.
Erin's team-  (Barbara, Jeff, Kathy, and Ginger) installed some doors and some window sills.  There is still a lot of painting.
We had a very good team meeting tonight.  Devotions were by Bob.  Gary has been playing his guitar at devotions.  That has added a nice touch.
Troll is on his way.  He left Atlanta at 10:30 EST.  He said he was going to sleep part of the way and get here mid morning.
This trip has been a lot different for a few reasons.  We are such a big group, and we are split up to 4 different sites.  Darlene and I talked a little bit about how it's been two and a half years, and while there is a lot to be done, still, The people that are here are moving on.  Most likely, the people in the Gulf will define their lives two ways-  before the storm and after the storm, but they are trying to move on.  They don't NEED to tell their stories anymore.  They have been telling it for the past 2.5 years.  Would you get tired of it?
I am really proud of Erin.  I have treated her like a work crew leader, and she has stepped up into that nicely.
The new people, Kathy, Vern, Ali, Gary, Jeff, and Dave have been fitting in well.
Tomorrow, the UMCOR people suggested and encouraged us to New Orleans tomorrow.  We are going to do it.  So we are going to work a half day and see the 9th ward and other places around New Orleans.
Things to pray for:
Matt's health
Corrine M. and her daughter, Laurie
Jim P., who was a part of our planning team, now recuping from cancer surgery.
Our home owners
Jeff's kids are having a hard time with him being gone.
Dave's kids ditto.
Ok, that's all for now.
Goodnight!
R
https://bethetool.org/wp-content/uploads/2019/05/be-the-tool-logo.png 0 0 Rod Scofield https://bethetool.org/wp-content/uploads/2019/05/be-the-tool-logo.png Rod Scofield2008-04-30 04:00:002008-04-30 04:00:00NOLA 1 Day 4 Tuesday
0 replies