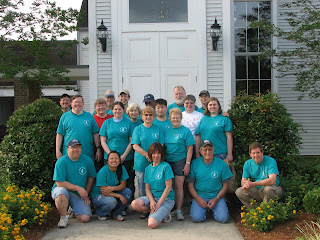 Obviously, we are back.  Thanks to everyone who prayed for us and wrote notes during the trip.

We left Slidell, LA just after 8:00am on Saturday.  We drove to St. Louis, where we saw the Arch for a few minutes.  When we got to the church we stay at, I couldn't find anyone from the church, but the code to get in worked and the rooms we stay in were unlocked.  It felt a little odd, but we've been to this church eleven times now, so our routine is pretty set.  We unloaded and made a dinner plan.  Usually, we have gone to a pizza joint around the corner a few blocks away.  We found a new pizza place to eat dinner that was a lot better pizza and a lot better service.
The next morning, we left Kirkwood (St. Louis) shortly after 8:00am.  We arrived at our church parking lot pretty close to 6:30pm.  This is pretty good considering a stop at McD's for lunch and a stop for our last devotions.  Sue L. and several others were there to help clean out the vans and welcome us back.  They made signs that were taped to the windows of the church.  (IF anyone from the team got a picture, post it on the blog if you can or email it to me?).
The next day, I took the rental equipment back to Midway Party Rental and the van back to Boyer Ford.  Jeff took the trailer back to the rental place we got it from.  (notice I am not mentioning their name.  They gave us a deal on the trailer, but gave us one with no working jack-  we had to have people hang on the back of it to get it on and off the hitch.  Funny for memories, not funny for paying, although if I spent $5.00 on empty cups, why WOULDN't I spend $275 on a defective trailer?–  If anyone knows where we can rent one from next fall, let me know.)
So for this trip, there is just some paperwork to bang together, and the Show and Tell dinner (May 17th 5;30 at Faith UMC in West St. Paul) before this trip is "over."
And people are asking, "How was it?"  –  It was good.
Obviously, every trip is different.  There are different dynamics based off the projects we work on, where we are, the people that go, etc.  The other dynamic is the time elapsed after the storm.  The relationships we developed with our homeowners is different than it was right after the storm.  The relationship with the neighbors, with the community, with everyone is different.  We don't do what we do for thanks or praise, but you notice now, that you don't get it as much.  And again, it's not what we are there for.  It was a dynamic that surprised us at the beginning.   People seemed to want to talk about the storm and where they were and etc.  This isn't the case anymore.  My team didn't even meet Herbert (our homeowner) until Thursday.  So we are not developing the relationships that we did before.  In previous trips, we made it a point to try to get out into the community at night to talk with and listen to the people.  This time, we stayed at the church compound most nights.  –  Made a few connections on the basketball court, and with the Indiana team that was staying with us, but generally, we hung out mostly with ourselves.  So the "benefits" are more pure.  We are helping people get back into their homes because it is the right thing to do.  Not for praise.  Not for recognition.  Just because Jesus loves them and us, and gave us the resources and ability and the desire to help.
There is still a LOT to be done.  There aren't as many people going to help as before, either because of today's economy or because people are tired of it or because they don't know the magnitude of people still waiting to get back into their homes.  I can hear some saying that it should be cleaned up and done by now.  They haven't gotten back into their homes because they're lazy or welchers or whatever.  This just isn't the case.  Northshore Disaster Recovery Inc., says that the main demographic they service is single women over 70.  Its' not that they don't want to do anything, it's that they just don't have the resources.  Disaster "specialists" say the recovery period for a disaster is usually 18 months.  Based off their own model and the magnitude of the damage caused by Katrina, the recovery time here should be about 11 years.  It's only been 4.  It's not time to get tired or bored with it.  It's not sensational anymore.  And  house after house gets tedious, I think, but it is still the right thing to do.  God has given us the resources, the abilities, and the desire.  NOLA 3 this fall.  Who's in?
The pic is our team photo-  You could be in the next one!
Front row, Rod Sc., Ali S, Jill H., Bob N., Darold S.,
2nd row:  Paul A., Mari F., Corrine M., Kathy B. Erin C.
3rd row:  Pastor Carolyn, Barbara S., Matt S., Ginger S.,
Back row:  Jeff S., Howard N., Jake S., Lewis W., Rod St., Roma B.
Last things:  The Blog-  www.rodscof.blogspot.com   There is a link to our pictures.  (I think you could also see my family's Christmas pictures if you tried…)  Erin and Ali and Jake can also post on there, and they might put in some closing thoughts or more pictures.  We will also put in some other tidbits, like the date that Dale Kimball from NDRI will be speaking in St. Paul, and some of the notes/etc. from some of the devotions that different team members gave.
Ending with this:
Isaiah 61:1-2
The Spirit of God, the Master, is on me because God anointed me.

He sent me to preach good news to the poor,
heal the heartbroken,
Announce freedom to all captives,
pardon all prisoners.
God sent me to announce the year of his grace—
a celebration of God's destruction of our enemies—
and to comfort all who mourn

NOLA 2 Friday This Time Around…
Scroll to top