Thanks for your patience yesterday.  We worked a half day, and then went to New Orleans.  We walked around a bit and had dinner at a Gumbo restaurant in the French Quarter.  We drove back across the long bridge that spans Lake Pontchartrain and got home kinda late.   Jake S. needed to try to experience every single cultural thing about the South and New Orleans.  So whirlwinded a bit.  On our way in, we did a tour they gave us around areas mostly affected by
Katrina.  We went through St. Bernard’s Parish and the Lower 9th Ward to name a couple areas.  There is more life in the Lower 9th and in St. Bernard’s Parish than the last time we came through.  But there are still many many many homes that are not being lived in or even worked on.  The next picture is of the Lower 9th from a hill near the levy. 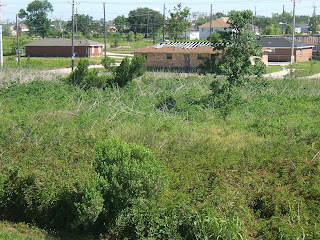 In the Lower 9th, there are a lot of houses that haven’t been touched, a lot of cement slabs just sitting there, and some houses that are showing activity.  Most notable, I thought, were the houses that Brad Pitt and Angelina Jolie are having built.  There were several of them in a few block radius.  The houses all looked really neat-  a non-traditional architecture.  I thought other people were getting pics of some of these houses, but not many did.  Even still, there is still sooooo much to be done.  The next two pictures are of Branjolina’s homes.  The link for their website is :  www.makeitrightnola.org/ 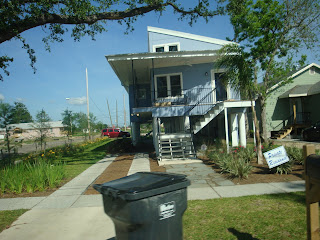 Disaster Recovery says that Slidell and the northern area around Lake Ponchartrain is 85% restored.  The greater New Orleans area is about 15% restored.  This is due to several factors, some political, some geographic, some logistic.  Remember that at first, they weren’t letting people into New Orleans.  Slidell was not closed off and took all the volunteers they could get as soon as they showed up.  This organization hopes to be “done” with St. Tammany Parish (North Shore of Lake Ponch.) by the end of 2009, and can then focus all their attention to the South Shore.  They say they have logged 2.6 million hours of work.  There are other statistics, but I invite you to pay attention to announcements in this blog about when Dale K. from Disaster Recovery will be in St. Paul.  If you’re anywhere close by, we would love to have you stop in when he speaks.  He is compelling.
Other things we have done:
Darold did devotions Wed. night
Paul did devotions Wed. am
Jill did devotions at night
The team working with Rod Sc. started laying laminate flooring.  See the picture below.
The team working with Howard continues to be a drywall machine.  They will get as much as they can done before it’s time to go on Friday. 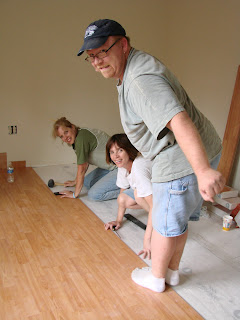 Our team (Rod) met our home owner today.  His name is Herbert.  We are taking him out to lunch tomorrow.  He is really excited to be getting so close to getting back into his house. 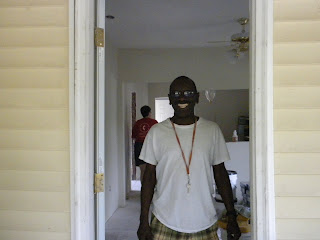 Chicago won by 1 point in triple OT.  I don’t know who got voted off the island on Survivor yet.  (DON’T tell me!  I’ll watch it when I can!)
That’s all the news I can think of.
Prayer requests:
Team Unity
Safe travel for Howard (He has to fly back to St. Paul on Friday afternoon)
Herbert’s health (our Homeowner- he didn’t offer specifics and I didn’t ask.)
Continued safety on our job sites
Pastor Carolyn and Jeff S. left kids at home with their spouses.
Pray for Jeff S.’s back
And that we get adequate sleep.  (I keep telling them that when I was on my trip in Cuba, we took a nap after lunch each day.  Nobody is getting the hint.  )
Ok-  thanks all!
https://bethetool.org/wp-content/uploads/2019/05/be-the-tool-logo.png 0 0 Rod Scofield https://bethetool.org/wp-content/uploads/2019/05/be-the-tool-logo.png Rod Scofield2009-05-01 04:29:002009-05-01 04:29:00NOLA 2 Wed. and Thursday
3 replies