We got up on Saturday morning and intended to leave North Rampart Community Center by 8:00am.  We pulled out around 8:45.  We dropped Rod St. at the airport since he had to get home right away to preach at his church on Sunday morning.  We drove for hours uneventfully.  At one point, though, I was sleeping and Corrine was driving.  Pete woke me up and told me the chains were dragging on the trailer.  I told Corrine to “pull over now!”  Apparently I was a little brusque, because when I got into the van after fixing the chains, she was in one of the back seats sitting meekly like she did something wrong.  She thought I was taking the keys away from her or something.  I guess I didn’t say why she was pulling over.

We arrived in Kirkwood (St. Louis) a little after 8:00pm.  And the coolest thing happened.  There was a group from their church there to greet us and help us with our luggage.  They had cooked dinner for us and they hung out with us for awhile.  They treated us like conquering heros.  They had cooked chicken with cheese and mushrooms and all sorts of deliciousness into it.  And a salad, and a jello dessert, and pumpkin cookies.  After dinner, they did devotions for us.  Barb, who is leading a team to New Orleans in the Spring also, told two stories about their previous trip.

When Barb was first considering going on a mission trip to the Gulf, she asked around about where they would be staying.  And at first, they heard there would only be one bathroom for the twenty of them.  This would make things very difficult.  In the end, it turns out there were two, and only two showers.  But it turned out to be one of the best parts of the trip, because when they got back from working, they would gather in dining area talking about what they did and saw that day.  They would hear someone yell, “next!” and the next person would go get cleaned up.  When everyone was done, they would have dinner together, but this waiting provided some golden time for them to grow and fellowship and enjoy each other and hear their stories.  What could have been a crabby, impatient time, they used, and God used for good.

On their trip, one of their home owners, on the first day they were working, met them and welcomed them and thanked them, and told them she was on her way to the doctor’s office for a scan of some kind. They prayed for her and went back to work.  A couple days later, the homeowner got the results.  She told Barb’s team that she had been diagnosed with cancer.  Barb’s team stopped working and came around and prayed for her and cried with her and just spent time with her.  It turned out that one people on Barb’s team had MS, and could only really put in about a half day.  From that time on, that person sat and talked with the home owner for hours at a time.  God used Barb’s team to minister to this woman in such a profound way.  It turns out the important thing wasn’t getting so much further on the house as it was being there for her in a dark time.  It also goes to prove that God will use the people that are willing, MS or whatever.

So if God is calling you to come with us the next time, and you don’t think you have anything to offer, by all means come and offer what you can.

On Sunday morning, we left Kirkwood shortly after 8:00am and headed north.  We had breakfast in Hannibal, MO at Howard’s favorite buffet.  And I will tell everyone that I didn’t miss any turn, I MEANT to drive 5 miles out of the way to drive over the Mississippi River, over a couple of cool bridges, and right into Illinois.  And if you believe that I meant to, you may want to check your gullibility filters.  (I figured out something was wrong when I saw bridges, and KNEW something was wrong when there was a sign that said, “Welcome to Illinois!”)

When we got to Albert Lea, Rod St., joined back up with us and picked up Ginger.  We did our final devotions and said goodbye to Rod and Ginger, and to Lewis, who Howard would be dropping off in Lakeville. 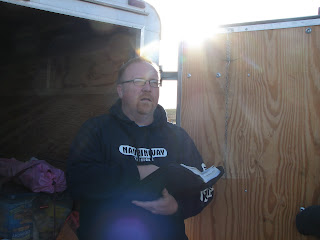 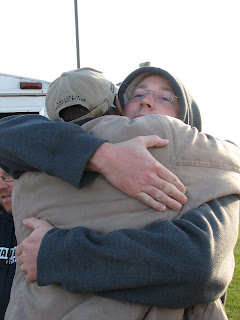 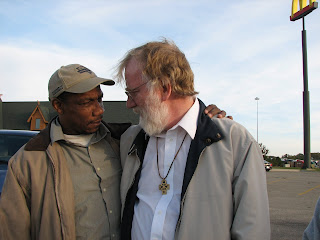 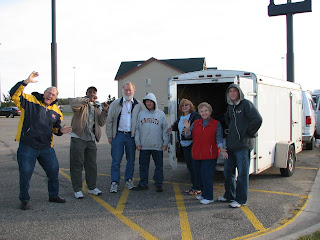 When we got to Salem UMC, there were a group of people there to help clean up the van and unload the trailer.  It was more than I expected since Erin wasn’t on the team this time, but her parents showed up anyway.  Jeff, who was supposed to come with us brought his family as did Pastor Carolyn.

A good trip come to an end.

After I dropped Corrine off at her home with all her stuff, (and yes, Bob, I did leave that bucket of dried drywall mud at her house), I got that nostalgic end-of-camp feeling.  When you spend that kind of time together, you just can’t help but miss them when they’re gone.  Even after two long days cooped up in a van together.

We will be getting together again soon to debrief the trip, do some evaluation, etc.  We will not be having the traditional Show and Tell Dinner we have been having.  We decided that we spend too much time on inside jokes and stories and it drags out and on and on an out.  We are putting together a little “Thank You!” video to show at the churches instead.  I think I will open that meeting up to anyone that wants to come, because in essence, we will be starting to plan the next trip.  (April 24-May 2nd-  I signed us up for a few more slots than usual……  If you want to come, shoot me an email.)

In a couple days, or maybe tomorrow, I will post some closing thoughts, etc.  Ali told me she would post something within the next day or two also, so come back and check out what she has to say about the trip.  I don’t know if Kim will post on here or not.  Maybe when she’s got some of the videos done, she will put some vids here.

NOLA 3 Thursday and Friday And we’re back.. Again!
Scroll to top