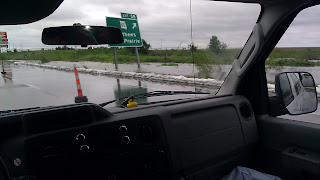 NOLA 6 has started.  We have arrived in Slidell and have settled in to our housing.  But I'm getting ahead of myself.
On Friday night before we left, we had a Commissioning service at Salem UMC.  Our District Superintendent, Liz Lopez, officiated. We shared in Communion and prayer.
Well, even further back than that-  Last week we had our jazz concert and silent auction fundraiser.  We ended up raising a little over $2000 and had a blast.  World Beat Connection was awesome and I would love to see them again some time.  It was a lot of fun.  And who knew that "deco beads" could be so highly sought after?   Many thanks to those who sent some checks and bid on stuff at the auction and bought Party Light Candles.  (We raised about $700 in Party Light).  Our finances look decent.  The price of gas went down about almost $.40 per gallon as we went south.  ($3.62/gallon in Slidell)
We are excited to have arrived in Slidell.  The trip was uneventful.  That is to say, nothing bad happened.  There was some concern about flooding along the way.  We didn't really see anything on our first day, but today there were sandbags holding water off the road in southern Missouri just a few miles north of Arkansas.  Then when we went through Memphis, you could the Mississippi VERY swollen.  I saw a sign almost underwater that said, "Road Closed."  Without the sign, I wouldn't have known there was a road.  I think Kristen got some pictures.  I'll see if I can post more of  them tomorrow.
We ended up with 22 people on the trip:  Howard, Barbara, Corrine, Bob, Lewis, Ginger, Jeff, Matt, Rod St., Ali, Kristen, Rob, Krissy, Carolyn, Leanne, Judy, Barb, Louie, Shirley, Laban, and Linda.
We brought 4 vehicles.  Our rental van, Rod St.'s van, Howard's truck, and my Focus.
Things to pray about for us:  Unity with the team we are sharing this space with from North Carolina, health and safety,
If you want to follow us on Facebook, search for "River Bend Mission Team."  To follow our blog, go to www.rodscof.blogspot.com.  I will give you the link to our pictures when I get some posted.  And if you want off this mailing list, let me know and I'll take you off.
Peace!
R
—
The spiritual life cannot be made suburban.  It is always frontier, and we who live in it must accept and even rejoice that it remains untamed.
—  Howard Macey
https://bethetool.org/wp-content/uploads/2019/05/be-the-tool-logo.png 0 0 Rod Scofield https://bethetool.org/wp-content/uploads/2019/05/be-the-tool-logo.png Rod Scofield2011-05-16 04:45:002011-05-16 04:45:00NOLA 6 - The road to Slidell
1 reply