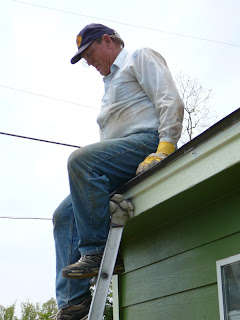 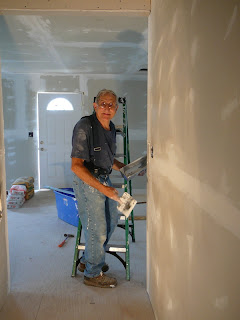 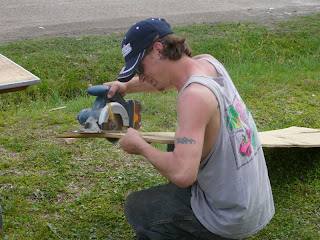 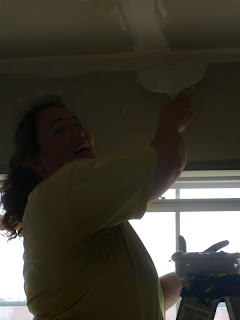 I just got done typing up the letter and then I lost my signal and lost it.

One of the biggest differences about this trip and the past two, is
that this one is much more work driven. We have not taken time to
socialize among other people or really, all that much as a group,
either. We haven’t had time to play. This isn’t a complaint, just an
observation.

We are trying to get Ms. Washington into her house.

What we are supposed to accomplish:
More sanding drywall
spraying the textured ceiling
priming the walls
finish the soffit (we have about two thirds done)
put up trim on the siding
acquire and install cabinets.

Today Bob taught me how to do some drywall. (some)- I felt a little
like Troll on our first trip when he was excited about putting up the
ceiling fan. He had never done anything like it before. He was proud
that he did it himself, nobody yelled at him, and people walked under
it. Bob had me build a header and then enclose it in drywall. I did
and you can’t tell it was ME that did it! People walk under it and
nobody yelled at me. Bob is a fantastic addition to our team. He
knows billions about building, and is also a good manager and teacher.
He used to be a Navy SEAL and has an MBA. Anyway, I would love to do
another trip with him sometime.

We decided to do the rootbeer float party at the church tomorrow night.

People are starting to talk about Biloxi 4

Howard coming down off the roof (Don’t Jump!)
Bob (Howard’s brother)
Harold demonstrating “Safety First” (please don’t anyone show this one
to his mother!)
Teresa –